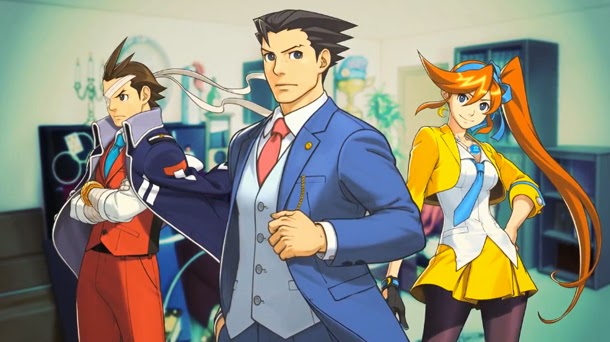 Finally Ace Attorney 5 has arrived, and it was worth the wait (and Capcom has confirmed that they're working on a new Phoenix Wright game, so hopefully we'll be seeing a 6 as well!) There will be light spoilers, so you've been warned.

I went into the game with mixed feelings, very excited about a new game in one of my favorite series but also disappointed because I already knew that Maya (quite possibly my favorite character in video games) wasn't going to be part of the cast. She was replaced by Athena Cykes (the girl in yellow in the picture above), a young lawyer who just started at the Wright Anything Agency. Athena's purpose seems to be that she's studied analytical psychology, and she can get additional information during cross examination using the Mood Matrix. She does this by finding statements where the emotions don't match what the witness said (ie the witness is happy when they're saying something sad.) This is there to make the court sessions a little more fresh (like they did with Apollo and his bracelet in Ace Attorney 4.) It's a neat feature and did what it was intended to do, but I still prefer Apollo's perceiving to the Mood Matrix.

While the game stars Phoenix, you play as Apollo and Athena for one case each. Generally, Athena is your sidekick when you play as Phoenix and Apollo is in the background, which is a little bit of a bummer. Athena's personality is pretty similar to Maya and Trucy (the other primary assistants), but there's just something about her that made me indifferent (likely the fact that she isn't Maya.) They went with the assistant in peril story for one of the cases again, and I found myself not really caring about saving Athena, and not caring about her backstory in the way I did with the other characters in the game. Professor Blackquill was a good addition to the cast, as the new asshole prosecutor (a big change of pace from Ace Attorney 4's Prosecutor Gavin, who did get a cameo in case 3!) Blackquill has been convicted of murder, but is still allowed to be a prosecutor. They explain the reasoning in case 5 and the concept is absurd, but that's part of the charm of the series. You put a killer whale on the witness stand in the bonus case after all.

As far as the gameplay goes, the only update to the court proceedings is the Mood Matrix. You still press witnesses for more information and present evidence (and use Apollo's Perceive in a few cases, which I would have liked to see more of.) They give you more hints this time around as far as what you need to be looking for in the next contradiction, which can be good or bad depending on how much you want to think.

The real changes in gameplay came in with the investigation sequences. They streamlined the process, and it's a lot better here than in the previous games. There's a notepad that tells you the things you still have to do before you finish your investigation so you don't forget what you're doing, but the real change is the point and click portion. Instead of having to click through every little spot in the room when you've found everything that stands out and still can't advance, the game will show a circle on the pointer if there's an object you can investigate, and a check if there's something you've already looked at. This makes it a lot easier to keep track of what you're doing. You can also change locations within the areas you investigate, and you only need to investigate specific rooms for clues, instead of looking everywhere you went like in the previous games. Another plus is that when you've investigated everything you needed to and are ready to advance, it will move right along so you won't sit there looking for more when you don't need to.  The interview sequences are also much better, as your character will tell you when you need to present evidence to get more information, so you don't have to find everybody and present everything you have if you're stuck.

The cases are pretty solid and they've added anime cut scenes to each case, which is also a nice touch. The game begins with an explosion blowing up one of the courtrooms in the middle of a trial, and that remains overhead until the end of the main story. I was able to pick out the real killer in case 3 from the first time I saw them and while you can usually figure it out early based off of Phoenix Wright logic (not going to go into the details on that since it might spoil things for people that have yet to play the games), they threw a wrench into that formula later in the game. I was pretty surprised at how case 5 concluded and they tied everything together at the end nicely. There were some pretty intense moments in cases 4 and 5, especially with Prosecutor Blackquill.

I normally don't like DLC, but the bonus case was well worth it. I thought I had the killer in the bonus case figured out with Phoenix Wright logic when the first day of court ended and the game leads you down that path, but then they changed it up in an amazing way so the formula no longer holds up, which is great. The bonus case is one of my favorites in the series, with a lot of twists and turns, great characters, and an amazing ending.

Overall, this was an outstanding game, a must for anyone who enjoys visual novels/point and click/thinking. It's easily the most playable in the series due to the investigation improvements, and the cases are very good. They left out some very notable characters from previous games (1 year passed between Apollo Justice and Dual Destinies, and 8 between Trials and Tribulations and Dual Destinies) in Maya, Detective Gumshoe, Ema Skye, Larry Butz, and Franziska von Karma, but having Pearl appear in two cases was a nice surprise. I probably would have rated the game higher if I cared about Athena as the new second, but what can ya do.

Upcoming reviews: The Legend of Zelda: A Link Between Worlds, Wing Commander IV: The Price of Freedom

If there are any games on my top 100 you'd like to see a more detailed review on, or any games you know I've played that you'd like me to review, let me know! Unfortunately, I don't have time to pick up new games that aren't already on my short list, at least for the next year or two.
Posted by Joe at 6:49 AM